Her research engages communities of color and grassroots organizations that are involved in developing sustainable community food systems. She is working on her first book, Freedom Farmers: Agricultural Resistance and the Black Freedom Movement. Other projects include a multiyear, multimillion-dollar USDA research grant to study food security in Michigan. 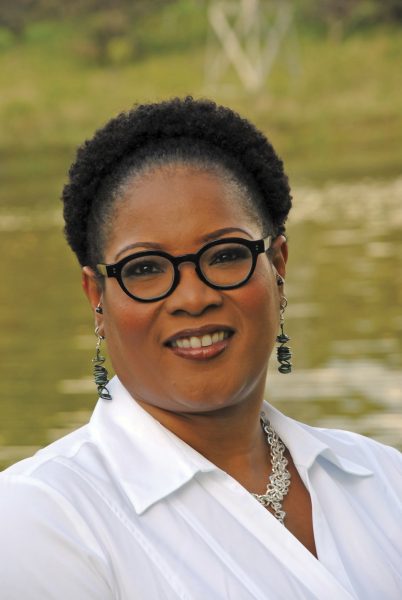 You’re a fairly recent arrival at CALS and the Nelson Institute for Environmental Studies. What goals do you have for your work here?
I am really excited because it is a position that allows me to talk about how communities are responding to food insecurity, how communities are engaged in local food and urban agriculture, and I can bring that into the classroom. I also bring activists to Madison and take students to Detroit. Madison has been a very welcoming place to integrate all of those pieces of who I am as an academic, as an educator and as a researcher. So there’s a nice way that these pieces operate, and my departments are extremely excited about the work that we’re doing.

Do you have a specific project you’re focusing on?
One example is for the capstone course in the Department of Community and Environmental Sociology. I took students to Pleasant Ridge, Wisconsin, where students were able to look at a rural community that had a pre–Civil War black settlement. Students were involved in the archives and then we met with folks who live there. Unearthing the history of black farmers in the state of Wisconsin is something that I’m moving toward as we investigate the relationship between communities and agriculture and all the benefits that come from that.

Is urban agriculture something new?
I would argue not. I would say that as long as we’ve had people in cities we’ve had folks engaged in growing. My dad moved from Alabama to Detroit and he always had a garden. Often the assumption is that the northern migration meant folks were leaving behind their agricultural past. But they brought seeds with them and they brought the knowledge with them to the north— to cities like Gary, Detroit and Chicago.

And if you look back to 1894, Hazen Pingree, then mayor of Detroit, passed an urban gardening ordinance where he encouraged those who owned land to allow that land to be used by those who were unemployed. If we go back to the 1890s, we can’t argue that urban agriculture is new.

It’s just new in terms of its current incarnation. More people are looking at it as a strategy to respond to food insecurity, and knowledge and news about it are more widely available through the Internet and many other forms of media.

What’s encouraging about the movement is that people see themselves as agents intervening in the food system for their own and their community’s best interests. So, for example, I see that I have a corner store selling mostly cigarettes, tobacco, alcohol and lottery tickets. And I see vacant land. And instead of saying, “Hey, give us a grocery store,” people are using the land to grow food in response to food insecurity. I think that part of it—the intentional political engagement in growing food as a way to respond to neglect on the market side—is probably a way people haven’t thought about urban agriculture before.

What I have found is that in moments when the United States has had economic downturns, black farmers have come together in an effort to rebuild or to survive, often in the form of agricultural cooperatives. You have moments where sharecroppers, tenant farmers, landowners—all kinds of agriculture workers—did things to ensure greater access to resources and to stay on and work the land. These agricultural cooperatives operated in three primary ways. One was through political mobilization and political engagement, such as harvest strikes and voter registration drives. Another way was that they pooled their resources. They bought land and tools together, and they would share labor as a way to increase capacity to meet their needs. And the other way was in terms of community and institution building. Way back into the 1800s you see black farmers who built and created schools and markets and all kind of things that were pivotal and critical to survival for folks in rural areas post-emancipation.

What makes the process of urban agricultural community building so challenging?
Young people, in particular, are aware of the trauma around growing food. You’ll be on a farm in an urban area and you’ll hear children say “I’m not a slave” or “Don’t treat me like a slave,” and so this conversation around agriculture as oppressive, and the economically exploitive relationships of sharecropping and tenant farming, is something that is very much in the purview of people’s understanding of agriculture. Understanding the role of farmers in the civil rights movement and the black freedom movement gives people a different way to look at agriculture—at how black communities have benefited from a resurgence of growing food in the three key ways I’ve just described.

Do you have a sense of further work that needs to be done in Wisconsin?
It’s similar to work that needs to be done in a lot of places. How do we broaden the audience? How do we broaden the conversation so that it’s more inclusive of folks who have traditionally been marginalized or have been oppressed by agriculture? I don’t think that’s a Wisconsin thing, I think that’s a national, even an international thing. So as we see folks moving from rural areas to urban areas, and then getting to urban areas and finding that there’s a lack of access to healthy food, that really is the critical issue. How do you frame this discussion so that more people see themselves at the table, literally and figuratively? It’s about the language that we use and the connection that we make with folks to see themselves as members and agents in their own access to food, also in a community sense. When we grow food together, what does that look like for our community?

Are people excited about urban agriculture and local foods?
Absolutely. There are various reasons why people are engaging in the local food movement as growers or buyers or both. In some ways it has become more interesting because people see their place in the food system. Everybody can locate themselves in this movement and feel connected to why it’s important to grow food and know where their food comes from.