The American marten, a small, elusive member of the weasel family, was long thought to be extinct in Wisconsin’s Apostle Islands. Now, thanks in part to an endowed gift to CALS, they have been found roaming the area once again.

Evidence of the animal’s presence in the national lakeshore resurfaced in 2015 when a research group, led by forest and wildlife ecology professor Tim Van Deelen, identified several martens in photos taken by trail cameras. Some of the images came from a dozen cameras that Van Deelen purchased with funds from his appointment as Beers-Bascom Professor in Conservation. 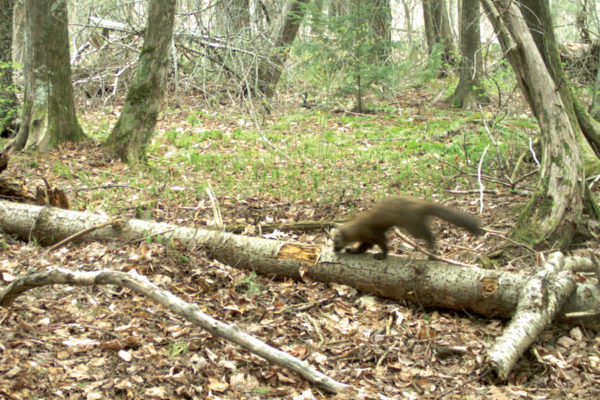 The professorship was established by William Beers, former chairman of the board and chief executive officer of Kraft, Inc. It is awarded to a CALS faculty member for outstanding research, teaching, and service in natural and environmental resources conservation and management. Van Deelen has held the appointment since 2015. He says he purchased the trail cameras because they are an invaluable tool for wildlife researchers.

“They can be out there gathering data night and day, in all kinds of weather, with minimal requirements of humans to go service them,” he says.

That trail camera technology, which has proven crucial in learning about animal habits and movement, is especially helpful for sighting rare and evasive animals like the marten. Wisconsin was once home to a stable population of martens. However, trapping and loss of habitat led to their complete extinction in the state by the early 20th century. State officials tried in vain to reintroduce them in the 1950s, but later efforts in the Chequamegon-Nicolet National Forest have proven more successful. 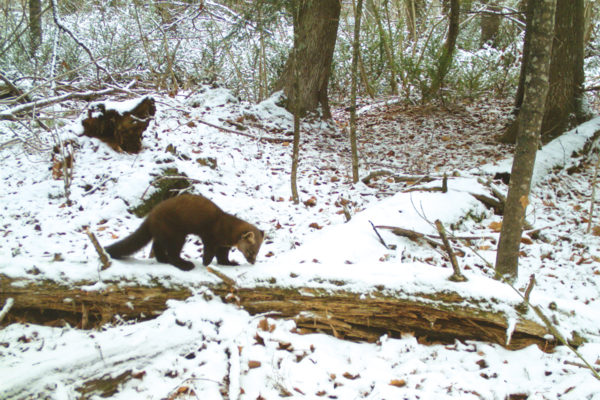 According to Van Deelen, there are three prevailing theories that could explain where the Apostle Islands marten population originated. One, it’s possible that a small group survived the original extirpation. A second theory suggests that they migrated from a group released into the Chequamegon-Nicolet National Forest between 1987 and 1990. Finally, they may be relatives of a handful reintroduced in the 1950s during what was considered a failed effort.

For the time being, no one has a true sense of how many martens inhabit the Apostle Islands. Researchers have found them on at least seven of the 21 islands, and Van Deelen believes they are fairly well distributed throughout the area.

The marten findings are encouraging, says Van Deelen. This summer, he may purchase and place additional cameras on the islands and also use his professorship funds to support student fieldwork. Morgan Morales, a graduate student assisting with the project, plans to return to collect more data. She says the trail cameras provide an “intimate look” into the habits of animals without the obtrusiveness of humans.

For Van Deelen, the camaraderie and discoveries of the project are just another reminder of the importance of professorship funds. “There’s a big value in having graduate students who are working on the same thing together. It’s an esprit de corps thing,” he says. “Purchasing the cameras enabled me to do that for the grad students.”