So you’re well along in developing this great new Cheddar.
You sample a piece from a trial run, and you notice this funny aroma. Kind of reminds you of gym socks. Can this Cheddar be saved? Here’s how researchers in UW–Madison’s food science department tackle the problem. 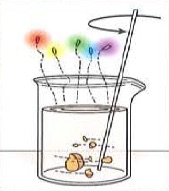 Extract the flavor molecules. Cheese aromas are created by the release of volatile compounds within the cheese. To identify which of those compounds might be causing an offensive smell, you have to capture them for study. The first step is to grate a pound of cheese and soak it in diethyl ether to create a solution.

Identify the individual compounds in the aroma. A cheese might contain dozens of different compounds that contribute to its aroma. Scientists sort them out by sending volatile compounds down a long tube inside a gas chromatograph. Because each compound has a unique molecular weight, the compounds arrive at the other end of the tube in a specific order. The chromatograph then compares each compound’s molecular fingerprint to a database of 130,000 known volatile compounds to identify and label it.

Run each of these compounds past a human nose. At the same time, a researcher takes a big whiff of each compound as it arrives at the end of the tube. This human “sniffer” uses a joystick and microphone to describe the intensity of the aroma. Scientists can then compare the sniffer’s report to the chromatograph record to pin down the source of any offending aromas.

Go back to the cheese. Most often the culprit can be traced to the presence of spoilage bacteria, yeast or mold in the system, perhaps due to poor milk quality or poor handling techniques. On the other hand, these same techniques can be used to identify pleasing aromas that can be amplified in the cheesemaking process.