FOR SUCH TINY ORGANISMS, BACTERIA lay a big footprint on our lives. And one reason why is that they can really get around. Most bacteria are able to navigate nimbly in a host of environments—including our bodies—to find food or a host, and the results can be both helpful (such as when bacteria boost our immune system or aid with digestion) or terribly destructive. But how does a brainless, single-celled organism plan its peregrinations? Doug Weibel, assistant professor of biochemistry, explains:

Whip it: One of the most common methods of transport for bacteria is with the aid of flagella, thin, whip-like structures that extend from the cell walls of many kinds of bacteria. Some bacteria have a single, tail-like flagellum or a small cluster of flagella, which rotate in coordinated fashion, much like the propeller on a boat engine, to push the organism forward.

The hook: Many bacteria also use appendages called pilli to move along a surface. These pilli, which can cover the surface of a bacterium like tiny hairs, bind receptors and pull a bacterium forward when retracted. Pathogenic bacteria such as Salmonella deploy this method of mobility when moving along the surface of a human cell in search of a place to dig in. 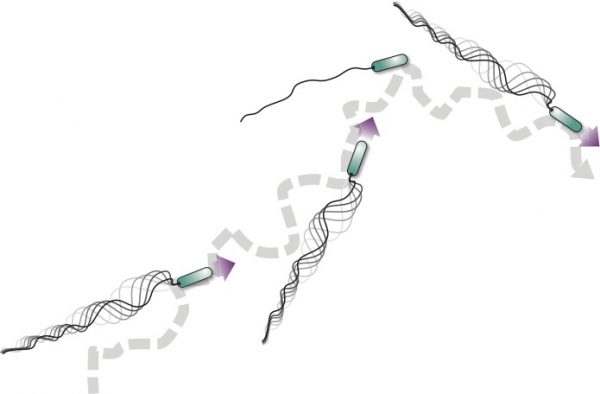 Getting warmer: With no brain to supply motivation, a bacterium instead must rely on chemical cues from its environment to provide an impetus to move. This process, known as chemotaxis, is completely involuntary. Bacteria simply respond to the tugs and pulls of their environment to take them to useful places. A bacterium tracking down a chemical stimulant (such as a nutrient) moves in a way known as “random walking.” About once every three seconds, a moving bacterium will suddenly “tumble,” a brief pause that allows the organism to reorient itself. If the chemical cues are right to continue, the bacterium will begin moving on the same path. If not, it will change course, creating a jagged path toward its destination. 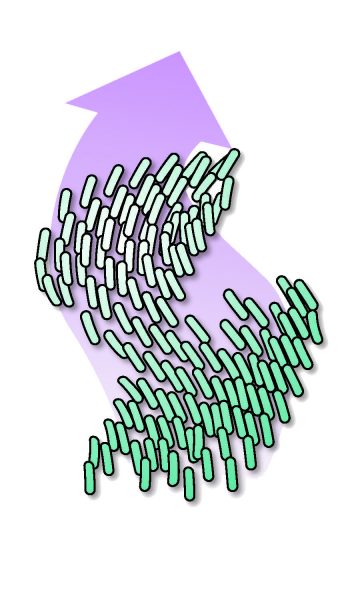 Joining the crowd: Some bacteria don’t just seek out nutrients—they also seek out each other. Like dancers in a performance, these strains cluster together to create swirling patterns of coordinated motion. Congregating bacteria also can join to form a biofilm—a thin matrix of bacteria stuck together on a surface. Bacterial cells in a biofilm can have characteristics that aren’t present when they develop on their own, and it’s believed that biofilm formation may play a role in many bacterial infections that affect humans. The discovery and exploration of these forms of bacterial collaboration has changed how scientists regard these organisms, which the more we learn about them seem anything but simple.

This article was posted in Health, Know How, Summer 2010 and tagged bacteria, Bacteriology.