Wisconsin’s Latino population is 74 percent larger and significantly more homegrown today than it was at the beginning of the century, according to a report by CALS demographers.

The number of Latinos residing in Wisconsin increased from 193,000 to 336,000 between 2000 and 2010, and the share of those who were born in Wisconsin rose from 40 percent to 45 percent, according to the report by the CALS-based Applied Population Laboratory. The share born outside the United States dropped from 40 percent to 36 percent, while the portion born in other states remained around 20 percent. 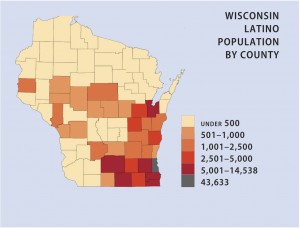 Ninety percent of Wisconsin’s Latinos live in urban counties—37 percent in Milwaukee County alone—compared to about 70 percent of all Wisconsin residents, the report notes. But while relatively few Latinos live in rural areas, some of the highest rates of growth are occurring far from urban centers. In Trempealeau County the Latino population rose from 240 to 1,667, a sixfold increase. In Lafayette County it went from 92 to 522, a fivefold increase.

“In many rural counties, in-migration by Latinos has stemmed population declines and filled gaps in the labor market caused by young non- Hispanic whites moving out,” says report co-author David Long, a researcher in the Department of Community and Environmental Sociology.

The 58-page report, Latinos in Wisconsin, uses graphics and text to provide a statistical portrait of 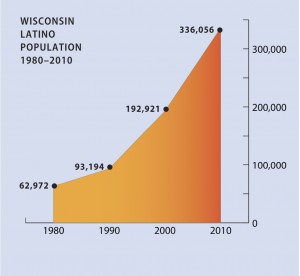 Latinos across the state, with details on such factors as income, employment, education, language proficiency, housing and health insurance. There’s also a companion set of “Latino Population Briefs,” one for every county.

Among other findings in the report:

Data in the report came from the 2010 census and the Census Bureau’s American Community Survey and various state agencies. The report and briefs are available online at www.apl.wisc.edu.