Many of the world’s greatest cheeses are made in Wisconsin. It’s a fact that begs the question: How do those cheeses get to be great?

A key ingredient is the Center for Dairy Research (CDR), based at CALS and operated with funds from dairy farmers, dairy food manufacturers and processors, and other industry partners. Located within a licensed, operating dairy plant on the UW–Madison campus, its facilities include a cheese pilot plant, a dairy ingredients pilot plant, a sensory lab, an analytical lab and an applications lab, all of which are available to cheesemakers and other dairy manufacturers for trial runs and testing new products. For experienced cheesemakers seeking rigorous additional training, CDR, in partnership with the Wisconsin Milk Marketing Board, offers a three-year program of courses and mentoring leading to certification as a Wisconsin Master Cheesemaker.

CDR’s experts boast hundreds of years of combined experience in industry and academia. Those experts have something else in common: Many grew up in the same milieu as the cheesemakers they work with around the state.

We are pleased to present here the success stories of two very different kinds of Wisconsin cheesemakers who availed themselves of CDR’s support and expertise.

When milk is converted into cheese, science alone takes you only so far, says Tom Dahmen, a second-generation cheesemaker who manages the Chula Vista cheese factory near Browntown, in southwestern Wisconsin.

“I’m a big believer in heavy-duty science, but there is always a bit of magic in making cheese,” says Dahmen, who began washing cheesecloths at age 6. Intuition and experience also play a role, he notes.

At Chula Vista, those ingredients are combined to produce a string cheese called Oaxaca (wa-HA-ka), which received the Best in Class award in the Hispanic melting cheese category at the 2016 World Championship Cheese Contest in Madison. The CALS community can take pride in this honor, because CDR helped Chula Vista create the cheese.

Oaxaca is a white, mild-flavored cheese used in many Mexican dishes. The cheese gets its name from the Mexican state where the style originated.

Chula Vista and V&V Supremo of Chicago were cheesemaking partners for decades. Last September V&V bought the plant, where employment has risen to 80, up from 34 about seven years ago.

Although Chula Vista purchased and sold Oaxaca cheese for several years, “We were never happy with the quality, so we decided to move production in-house,” Dahmen says. “I had spent 14 years making a related style, but there were challenges to our ‘make,’ so we went to CDR. They helped us from the beginning.”

Starting in around 2010, Dahmen and Alan Hamann, V&V’s senior manager of quality control, began talking with CDR researchers about the details of fat-protein ratios, milk solids, chemistry and pH.

“You have to control all of these factors even as the milk changes subtly from one truckload to the next,” says Hamann, who has more than 36 years of experience in the dairy industry. 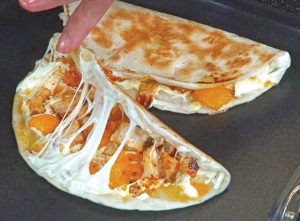 Once the ideas were collated, they needed to be tested. At Browntown, each test would require 5,000 pounds of milk, Hamann says. Vats at CDR, however, would require only 500 pounds, reducing cost and eliminating errors attributable to running tests with different batches of milk. “At CDR, we could test several variables at once,” Hamann says. “Working at CDR drastically cuts your timeline and offers much more control.”

When the improved Oaxaca reached the market in 2015, Chula Vista was producing one or two vats per week. Now the company makes that much in a day.

Oaxaca cheese is produced using a procedure similar to that used for fresh mozzarella. Pasteurized milk is set (coagulated) and cut in a stainless-steel vat and then turned into curd slabs that are moved to a cooker-stretcher, a machine where heating and repeated folding links protein molecules, forming the familiar elastic product called string cheese.

The stretched curd is then formed into cylinders by six nozzles, cut to length and packaged for shipment to stores ranging from “mom and pops” to Wal-Mart, says Philip Villasenor, V&V’s vice president of manufacturing.

As employment tightens, particularly in rural areas, CDR links manufacturers with existing resources for economic development. “It’s not just ‘Develop the product and you are on your own,’” Grassman says.

But when you visit Chula Vista, it’s all about the cheese. Even though Chula Vista aims for a standardized, pure product, “Every vat is a controlled experiment,” says Dahmen. “We are predicting what is going to happen, and we are pretty accurate, but this is a living system, and unplanned things happen: A pump dies. A cooler dies. People don’t show up. But once you start a batch, you have to finish.”

Those snafus are familiar to both Chula Vista and CDR, says Dahmen. “The beauty of working with CDR is that they are heavy, heavy on science, but their people have all worked in the industry. They have this blend of science and art that you can only gain from experience. For our Oaxaca cheese, they greatly shortened the timeline to reach the product quality we were looking for.”

The collaboration with CDR also served as a rich educational experience for Dahmen. Earlier this year he earned certification as a Wisconsin Master Cheesemaker for Quesadilla and Oaxaca cheeses.

If you walk into Roelli Cheese Haus near Shullsburg in southwest Wisconsin, you’ll see plenty of succulent Wisconsin cheeses—but not Little Mountain, the company’s champion cheese. It lives behind the counter, with nary a sign.

Little Mountain, described by its maker as a “classic upland style from Switzerland,” is not contraband, but Roelli is practically running on empty after a “Best of Show” at the American Cheese Society contest last July. “We feel pretty honored,” says company owner Chris Roelli, noting that Little Mountain bested 1,842 other cheeses in the competition.

Although Roelli is a fourth-generation cheesemaker, in creating the recipe and honing the details of microbiology, timing and equipment, he got assistance from CDR. “For us as a small business, tapping the experience at CDR was invaluable,” says Roelli. “It accelerated our path to bring this cheese to the market, literally by years.”

Little Mountain requires at least seven months of careful aging to achieve its characteristic flavor, texture and rind. Aging occurs in an above-ground “cellar,” with cooling pipes along the walls. Forced air would waft microbes, threatening the cheese with spoilage.

Roelli’s great-grandfather, Adolph Roelli, immigrated from Altburon, Switzerland to Green County in the early 1900s. “He was a cheesemaker’s apprentice in different areas of the Swiss Alps,” says Roelli. “He settled here as a farmer and sold milk to a co-op, which offered him a job as head cheesemaker, based on his experience in Switzerland.”

Roelli says he’s been in and out of cheese factories all his life. “I watched my granddad make commodity cheddar,” says Roelli, but the factory closed shortly after Roelli got a cheesemaker’s license in 1989. “We weren’t able to compete.”

In 2005, unable to stay away from the family business, Roelli returned with “Cheese on Wheels,” a cheese plant mounted on an 18-wheeler. 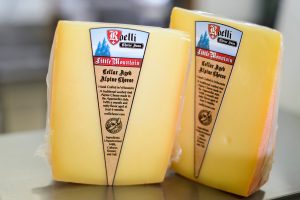 The following year he started an artisanal cheese business in a new factory behind his store on Highway 11 east of Shullsburg, and started to envision a Swiss cheese that would go back to the family’s roots. In preparation, he says, “I went around and tasted as much Swiss mountain-style cheese as I could.”

Both Emmentaler and Gruyère were already produced nearby, and Roelli mulled a Swiss version of Parmesan before settling on an Appenzeller, a hard-rind cheese flavored with “washes” of brine as it ages.

He approached John Jaeggi, CDR’s cheese industry and applications coordinator, with some flavor profiles he was looking for. “I made a couple of batches here as total experiments, and we went to the CDR and made six batches to fine-tune the culture and process,” Roelli says.

In Jaeggi, Roelli found a particularly kindred spirit for this project. Jaeggi is a third-generation, Swiss-descended cheesemaker from Green County who, like Roelli, grew up in a cheese family. “If you look at the history of Wisconsin, a lot of cheese factories were family operations and the family was involved in all aspects of the business,” Jaeggi says. “The younger generation would start on the bottom floor, cleaning, sanitizing, packaging and working their way up.”

The initial conversations with Roelli, Jaeggi says, concerned flavor, texture and equipment. “We talked about aging, culture, the ‘make’ schedule. Chris came up to CDR and worked in our test vats, looking at cocktails of microbial cultures for different flavor profiles. Once we got close, we went to his plant two or three times to make the cheese, then optimized the make procedure to fit his plant.”

The cheese would be aged from seven to 16 months while being washed with a hush-hush recipe of salt, yeast and bacteria. The wash would break down proteins and fat to create the rind and desired flavor.

“Although artisan cheesemakers are pretty open in general, when it comes to world-class cheese, there are still secrets out there,” Roelli says.

Holding secrets is a point of pride at CDR. “To be able to draw from the knowledge base at CDR was invaluable,” says Roelli, who has earned certification as a Wisconsin Master Cheesemaker. “There is nowhere else you could get that. If John Jaeggi or Mark Johnson [a CDR cheese scientist] asks for help from someone in Europe, they will help. They don’t know me, but they know them.”

Someday the world’s top cheesemakers may start to know Chris Roelli, who has built his future atop his history and the cheese wisdom brought by his great- grandfather from Switzerland. “If you make something really good, people will find it,” Roelli says. “We entered competitions to garner some interest from places where we don’t normally get it. You don’t have to set the world on fire with advertising.” 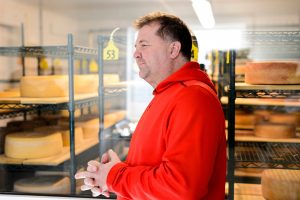 Demand for Little Mountain exploded after the award in July, Roelli says. “We beat the world champ from last year, and three other American Cheese Society Best of Shows from past years. We have upped production for the end of 2017 as much as we can. I still have a list as long as my right arm wanting the next batch.”