Since the beginning of their widespread adoption in the 1940s, antibiotics — the antimicrobial drugs we use to treat bacterial infections — have saved millions of lives. In recent years, however, misuse and overuse of these drugs in human medicine have helped put us on the path to a worldwide crisis. In this environment, harmful bacteria can evolve more rapidly, developing higher and higher levels of resistance. As a result, our “wonder drugs” are losing their effectiveness. This leads to longer and more complicated illnesses; greater risks for spreading infections; more hospital visits; the use of stronger, costlier, and more toxic drugs; and, ultimately, more deaths. Fortunately, scientists at CALS are facing this challenge head-on. From alternative forms of treatment to better methods of infection detection, here are some of the solutions they are working to bring to the world of modern medicine.

Microbiologist Jan Peter van Pijkeren looks at probiotics — those microbes thought to provide health benefits in our bodies — as more than just friendly bugs. He sees them as a way to sneak in antibiotic-free treatment for disease-causing bacteria like Clostridium difficile.

Known as C. diff, this resilient gastrointestinal pathogen causes stomach pain, diarrhea, and potentially life-threatening inflammation of the colon. But by loading the probiotic bacterium Lactobacillus reuteri with viruses targeted at C. diff, van Pijkeren aims to deliver genetic instructions that cause the pathogen to self-destruct.

In an ironic twist of fate, C. diff often colonizes the gut after antibiotics wipe out the microbial communities that normally keep it at bay. Infections often happen in hospitals, where antibiotics are becoming more common. Additional antibiotic treatments targeting C. diff don’t always work, and the infection recurs in as many as 20 percent of patients.

“The downside of antibiotics is they are a sledgehammer that depletes and destroys the gut microbial community,” says van Pijkeren, an assistant professor of food science. “You want to instead use a scalpel to specifically eradicate the microbe of interest.”

Van Pijkeren thinks that L. reuteri, a probiotic bacterium found in many foods and the intestines of most animals, could be that scalpel. His team was able to amplify by 100-fold the natural ability of their strain of the bacterium to survive its trip through the harsh environment of the gut, making it a good candidate to deliver antibiotic-free treatments to the intestines where C. diff resides.

Van Pijkeren’s idea, in collaboration with Rodolphe Barrangou of North Carolina State University, is to use one of C. diff’s own defense mechanisms, called CRISPR, against it. CRISPR is a genetic surveillance system that bacteria use to protect themselves from invading viruses, which inject DNA into bacterial cells to attempt to replicate. If a bacterium has the right sequence of DNA to match an invading virus, it can use the CRISPR system to cut the viral DNA, thereby inactivating it and preventing infection.

Scientists have used this ability to cut specific sequences of DNA to genetically engineer a wide range of organisms for research aimed at developing new therapeutics. The van Pijkeren lab, which has been developing CRISPR to genetically engineer L. reuteri, now wants to co-opt the system by delivering DNA that targets C. diff’s own chromosome. That DNA will be injected by C. diffspecific viruses, which will hitch a ride with L. reuteri into the intestines.

If it works, C. diff will unwittingly cut and degrade its own DNA, preventing the pathogen from multiplying and doing more damage. Because both the viruses and the genetic instructions are targeted at C. diff, Pijkeren believes no helpful bacteria should be harmed.

Working with Barrangou and funding from the National Institutes of Health, van Pijkeren has engineered L. reuteri to produce viruses that target lactic acid bacteria, an initial step toward getting the probiotic to produce C. diff-specific viruses. They are also developing ways to induce the probiotic to release these viruses at the right time inside the gut. If these lab tests go well, van Pijkeren’s goal is to start testing the system in a mouse model of C. diff infection soon.

“I think it’s pretty fascinating that an organism like Lactobacillus in such low numbers and small amounts can actually have a health benefit,” van Pijkeren says. “To then exploit these microbes to deliver therapeutics is very appealing because we know humans have been safely consuming them for thousands of years.”

Bacteria have developed an uncountable number of chemistries, lifestyles, attacks, and defenses through 2.5 billion years of evolution. One of the most impressive defenses is biofilm — a community of bacteria enmeshed in a matrix that protects against single-celled predators and antibiotics. But there’s a way through every suit of armor, and professor of bacteriology Marcin Filutowicz has found one.

Along with Dean Sanders, presently at the Wisconsin Institute for Discovery, and patent co-inventor Katarzyna Borys, Filutowicz has shown the first proof that a certain group of amoeba called dictyostelids (“dicty”) can penetrate biofilms and eat the bacteria within. In a recent study, the researchers pitted four types of dicty against biofilm-forming bacteria that harm humans or plants. For example, they targeted Pseudomonas aeruginosa, a common, multidrug-resistant bacteria that afflicts people with burn wounds or cystic fibrosis, and Erwinia amylovora, the cause of a devastating disease known as fire blight in apple and pear trees.

As expected, the results depended on the strain of dicty and the bacterial species. In several cases, the dicty completely obliterated thriving biofilms containing millions of bacteria, all of it captured in time-lapse, microscopic movies, the first of their kind. In addition to the cinematic evidence (see video above), other indicators of successful attacks against all four species of bacteria include spore germination and the subsequent union of single-celled dicty into a multicellular “slug” (a striking trait that has earned dicty the label “social amoeba”).

Filutowicz became interested in dictyostelids after discovering a neglected archive of about 1,800 strains amassed by Kenneth Raper, a UW–Madison bacteriology professor who discovered the soil-dwelling microbes and started collecting them in the 1930s. He found that Raper and his team were feeding and growing dictys in the lab using bacterial prey, but nobody had pursued their commercial potential as microbe hunters.

“They grow on E. coli [a common resident of the human intestine], and I quickly realized that, because dicty are not pathogenic, we might use them as a biological weapon against bacteria.”

Since 2010, Filutowicz has learned a good deal about how dicty “graze” upon bacteria, and which ones they prefer. “We looked at how these cells dismantle biofilms, trying to understand what physical, chemical, and mechanical forces deconstruct the biofilms, and how the dicty move in 3-D space,” he says. “These are phagocytes, and they behave much like our own immune cells, except our immune cells do not break down biofilms.”

His collaborator, Curtis Brandt, a professor of ophthalmology and visual science at UW–Madison, has produced promising results suggesting that the organisms are harmless to rodents. Now, the National Institutes of Health have given them and AmebaGone a $1.5 million grant to support their research on using dictys to fight bacterial keratitis, an eye infection, first in rodents and then in rabbits and humans.

“This medical application has a lot of promise,” Filutowicz says.

More near-term use for dicty are found in agriculture. In 2010, Filutowicz formed AmebaGone. With funding from the National Science Foundation, the firm has been advancing dicty products toward commercializations, including treatments for fire blight and other bacterial infections of crops.

“Our 2017 external field trials for fire blight treatments were very promising,” says Chad Hall, a senior scientist and director of AmebaGone’s fire blight project. “Several of our dicty-based products reduced fire blight disease without harming either trees or fruit. In fact, one of our treatments was as effective as the antibiotic streptomycin, which is the gold standard treatment for fire blight control in conventional apple orchards but is now banned in organic apple production.”

One way to prevent the overuse of antibiotics, and the drug resistance it creates, is to determine when treatment is not needed. And that’s one of the benefits of a new system developed by Isomark, a UW–Madison spin-off company, and its founder, Mark Cook.

Isomark’s system measures carbon isotopes in exhaled breath. Without even touching the patient, it can offer the earliest warning of severe bacterial infection, says Cook, a professor of animal sciences. He founded the company in 2005 along with Warren Porter, a professor of zoology; nutritionist Dan Butz; and others.

Their novel detection device can often spot a bacterial infection before the patient feels symptoms, increasing the potential for faster, better treatment for severe infections. The company is focused on intensive care units (ICUs), which treat about 5 million people in the United States each year.

Antibiotic-resistant bacteria like MRSA (methicillin-resistant staph aureus) are an accelerating problem in hospitals, says Isomark CEO Joe Kremer. “The average hospital stay is five days, but it’s 20 days with a hospital-acquired, resistant infection. The healthcare industry puts the cost of diagnosis, treatment, and the extended stay at $35 billion to $88 billion.”

These figures do not account for the pain, worry, and deaths associated with these severe infections. About 100,000 Americans die of a hospital-acquired infection each year, Kremer says, and ever-more stringent controls have not brought the problem to heel. But earlier detection may help.

When the immune system responds to an infection, subtle changes in the ratio of the common carbon 12 isotope and the rare carbon 13 can be detected long before a doctor, a blood test, or even the patient knows that an infection is present. (Isotopes are chemically identical versions of an element that can be distinguished by their differing masses.)

After gathering breath samples and medical records from 100 ICU patients, Isomark scientists saw a telltale change in the isotope ratio for each patient who became ill. “Our studies show that we are 18 to 48 hours ahead of when clinicians suspect an infection,” Cook says.

Rapid detection offers multiple benefits, he adds. This includes earlier treatment, which can reduce the ill effects that come with a severe infection, and earlier guidance for physicians about the need for tests to determine the location and cause of an infection. It can also lead to less antibiotic use.

Because bacterial infections are a major hazard in ICUs and operating rooms, “Antibiotics may be thrown at every patient after surgery as a preventive, but that is actually breeding resistance,” Cook says. “If a breath test comes back negative, antibiotics may be unnecessary.”

Since the test measures nonradioactive isotopes in exhaled breath, the procedure is noninvasive and safe. And the testing process could hardly be simpler. The patient breathes into a bag, or a sample is grabbed from a ventilator. The bag is connected to the tester, the patient ID is punched in, and results appear in 10 minutes.

Isomark is seeking FDA approval as a medical device and is gearing up for a final “regulatory trial” that will look at 300 patients in up to six hospitals nationwide. “We can’t be sure about the FDA’s decision, but the agency has been very positive,” Kremer says. A decision could arrive in January 2018. 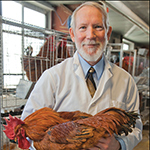 We are sad to report that Professor Mark Cook passed away in early September due to complications of cancer. He will be deeply missed by the CALS community and beyond. Read more about his life and distinguished career as a teacher, mentor, entrepreneur, and groundbreaking researcher in the realms of food production and animal health.