At the outset of a recent food-science class, Monica Theis held up a rutabaga and asked a room full of students, “How many of you know what this is?” Not a single hand rose.

That might sound like an indictment of the poor rutabaga, but Theis, who teaches nutrition and food management courses for UW-Madison’s dietetics program, says it’s symbolic of a deeper trend. Despite their allegiance to reality shows like “Top Chef” and “Chopped,” today’s students—like so many Americans—are largely lost in the kitchen, lacking the ability to prepare even simple meals from scratch. 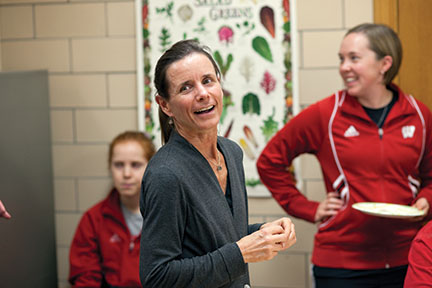 “We’re not talking about culinary skills. They don’t have the basics—how to use a knife or how to stock a kitchen,” says Theis. “Those aren’t skills you learn by watching celebrity chefs on television.”

But the odds are that students aren’t learning them at home, either. Forty years ago, the average American spent more than an hour a day preparing meals. Today that time has shrunk to 27 minutes, not quite half an episode of Bravo’s “Top Chef.” According to the U.S. Food and Drug Administration, the average American now eats at least four meals a week that are prepared away from home, and fewer than a third of households report making meals from scratch.

Reasons abound for the move away from home-cooked meals, including longer work hours, the rising prevalence of prepared foods and changing gender roles in the home. But the decline of home cooking may bring with it even greater dependence on sugar- and salt-laden processed foods, potentially worsening already troublesome rates of obesity, diabetes and heart disease.

In her dietetics classes, Theis stresses the importance of cooking during once-a-week labs in UW-Madison’s instructional kitchen, where the assignments can range from hard-boiling eggs to making lemon-pepper chicken. She recently worked with UW’s athletics department to begin teaching cooking skills to student-athletes, a pilot program that she hopes to expand to other campus groups.

But Theis acknowledges that such approaches only reach a fraction of people who could stand to benefit from them. “I really worry about where people are going to acquire these skills, particularly people who don’t have good access to kitchens or fresh food,” she says.

One step would be to rethink how food and nutrition are handled in public schools. Some critics, such as chef and food author Alice Waters, have suggested that schools treat lunch as a part of the curriculum, much like physical education. Theis would also like to see more time and resources given to family and consumer education courses, which she says are too often relegated to doling out lessons from a bygone era.

“I still see schools that are just doing the minimum, teaching things like cake decorating,” says Theis. “But really, how often do you need to decorate a cake?”

The average American spends 27 minutes each day preparing food, not quite half an episode of Bravo’s “Top Chef.”