What do Americans love more than french fries and potato chips? Not much—but perhaps we love them more than we ought to. Fat and calories aside, both foods contain high levels of a compound called acrylamide, a potential carcinogen.

First discovered in foods in 2002, acrylamide is produced whenever starchy foods are fried, roasted or baked, meaning that it’s found in everything from doughnuts to coffee beans. But fries and chips are relatively high in acrylamide compared to most starch-based snacks, and potato processors are eager to change that.

The problem starts with storage. Because fry and chip processors need potatoes year-round, most of the fall harvest goes into storage, where low temperatures can cause simple sugars to accumulate in the tubers, a phenomenon known as “cold-induced sweetening.” During cooking, those sugars react with free amino acids to produce acrylamide. The same reaction also causes fries and chips to turn dark brown during processing, making them unsalable. 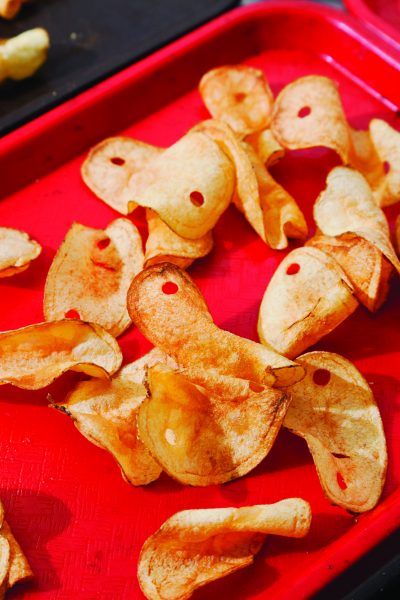 Jiang’s solution is to insert a small segment of a potato’s own DNA back into its genome. The extra DNA helps block the gene that converts sucrose into glucose and fructose, the sugar culprits that cause both acrylamide formation and browning. Through this process Jiang has created a numberof potato lines that produce very little acrylamide when cooked.

“Regular potato chips can have acrylamide levels up around 1,000 parts per billion,” says Jiang. “Ours are down around 150.” Jiang’s process, potentially of enormous use to the food industry, is now being patented by the Wisconsin Alumni Research Foundation.

But because they are genetically modified (GM), Jiang’s potatoes can’t be grown for consumption in the United States, where only a handful of GM crops have been approved and widely cultivated.

Jiang hopes that will change, and notes that GM versions of corn and soybeans, which are now added to many processed food items, contain DNA from other species. The extra DNA in his low-acrylamide potatoes, on the other hand, comes from the potato genome itself.

Down the line, especially if scientists confirm acrylamide’s link to human cancer, consumers may have to make a choice: accept a new GM crop or cut back on fries and chips.