She will arrive without ceremony, with no visible sign of her significance. She may be born in the United States or abroad, into wealth or poverty. But whatever the circumstance, her birth will mark an unprecedented and daunting milestone. She—or perhaps it will be he—will become the nine-billionth human being alive on Earth. A nine-billionth person to find a place in the world. A nine-billionth body to feed. And she will be here, some estimates predict, in less than 30 years. 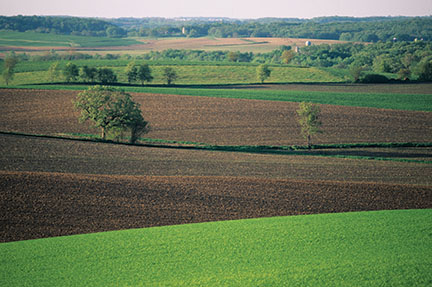 Nine billion people is a staggering figure for a world that struggles to provide comfort for considerably fewer. Consider our most basic of animal necessities: the need to eat. While enough food is grown on Earth to support its current population of just under 7 billion people, distribution and consumption of food is wildly uneven.

According to the United Nations Food and Agriculture Organization, more than 1 billion people are hungry, mostly because they lack the resources to grow or buy enough food to nourish themselves. Roughly the same number of people are overweight. In the United States, both obesity and hunger are blooming national crises, underscoring the complex web of social, cultural and economic forces that swirl around our relationship with food.

These problems will grow no easier as the planet approaches 9 billion people. The FAO estimates that the world will need to produce 70 percent more food by 2050 to keep pace with population growth and increased demand for calories. And this productivity boom will have to occur despite depleting natural resources, a diminishing supply of suitable land and a changing climate that could drastically alter the growth of crops we lean on most heavily to feed the world.

On the following pages, you’ll see how a dozen CALS scientists are beginning to tackle those questions. Their ideas envision a range of  alternatives for how we grow, prepare, distribute and even eat food. We offer them as food for thought—or more fittingly, as thought for food. These are not the only possible answers to the challenges that face our food, but they offer a glimpse of a different kind of future with food, one in which our nine-billionth child—and all who come after her—are born into a world of plenty.